Menu
Confraternity of the Most Holy Rosary > Uncategorized > Facing Our Littleness 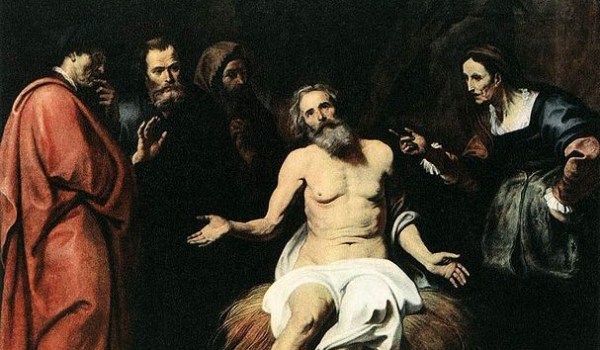 But that’s not what I said! What I was trying to say was much subtler, much more profound, much more just than that…

How often do we think these words when we experience the (sometimes playful) derision and ridicule of others in response to a complaint we have made? Even if we can see how our complaint can be taken as petty and selfish, it can be a struggle to take the not so subtle criticism gracefully. Indeed, the temptation is to become indignant and frustrated that our complaint has seemingly fallen upon deaf ears. How can we be sure that they even understood what we were saying? After all, that’s not what I said!

Perhaps Job had a similar reaction to the dramatic criticism of Elihu. If there was ever a person with justice on his side, it must have been Job. Here was a man whom even the Lord upheld as unparalleled in his piety and fear of God (Job 1:8), yet he still suffered immensely.  To make matters worse, his own friends refused to accept the justice of his case, advising him to own up to some transgression he never committed. And if that wasn’t enough, there came along that pesky upstart, Elihu, who exaggerated Job’s claims to innocence (33:9) and apparently fabricated his alleged transgressions (34:8). When would this mockery on mockery come to an end? How could Job endure such an unjust representation of his complaint?

Surely Job knew that his claim was not nearly as trivial as Elihu made it out to be, yet Job never objected. In the face of all that derision, he remained silent. Moreover, without ever being told why he suffered, Job eventually recanted all he had previously said in complaint, repenting in dust and ashes (42:6). Why would he do such a thing? Why would he not persevere and get an explanation for all his suffering? After all, God did ultimately affirm what Job said of Him (42:7).

Sometimes, however, we push our case too far and blow things out of proportion. Though Job was completely innocent, he was still only one of God’s many creatures. God did not owe him anything, not even an explanation of his suffering. Elihu’s account points to the incongruity of a creature calling upon his Creator to deal with him justly, which may have led Job to see that he was not owed anything by God, even if he had not sinned. Even if Elihu’s arguments did not help in this way, Job seemed to appreciate the incongruity of his case as a result of God’s speeches from the whirlwind. In his characteristic humility, Job conceded that his case with God could not stand: “I have spoken but did not understand; things too marvelous for me, which I did not know” (42:3b). In the face of God’s awesome majesty and power, Job was content with his lot.

Now, this brings us to the most important development in Job’s story, which helped alleviate his suffering and diffuse his complaint: God’s presence. In the midst of his lament, Job called out for God to come and answer him. Job yearned for the presence of God, though Elihu denied that Job would receive such relief. Who was Job, a mere mortal, to request the presence of God?  The Almighty does not deign to come before mere mortals: “Therefore people fear him; none can see him, however wise their hearts” (37:24).

But God did come and respond to Job’s complaint! In a gratuitous action of mercy and love, God mysteriously resolved Job’s complaint by speaking to him out of the whirlwind. Job withdrew his claim, recognizing God’s providence over all His creation. In the end, God’s presence restored the order of Job’s life, allowing him to die peacefully, with his family, old and full of years (42:17).

Like Job, all of humanity finds itself faced with a situation of seeming injustice. We were not present when our first parents sinned; we did not eat of that fruit; and yet we are marked by that Original Sin. We suffer the consequences, and we cannot do anything to resolve the situation. And yet God deigned to take pity on us in our fallen and broken state. In an act of complete gratuitous love, God humbled himself and became man. He did not have to resolve our problem, yet He does; and He does so through His presence among us.

During the season of Advent, we recall the wondrous event of the Incarnation and look forward to commemorating it at Christmas. Yet we also wait and yearn for His second coming, when He will wipe every tear from our eyes and bring everlasting comfort to His people.