Menu
Confraternity of the Most Holy Rosary > Culture > Election Day 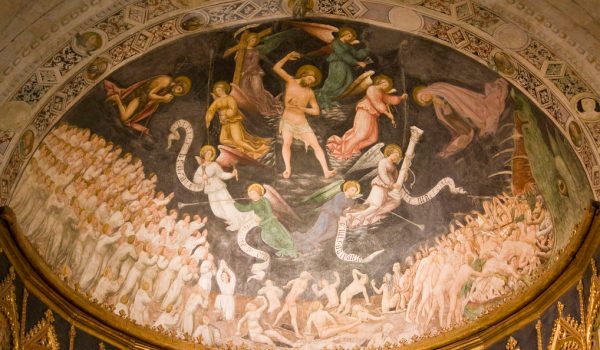 I don’t envy Trump or Clinton. They sit underneath the public microscope. Critics from either party want whatever dirt they can find. They clamor for financial statements and medical records. Such scrutiny would make any of us squirm.

But just as I relax in my anonymity, I read a disquieting Scripture passage. Jesus tells his disciples: “For nothing is hidden that shall not be made manifest, nor anything secret that shall not be known and come to light” (Lk 8:17). And elsewhere, St. Paul adds that Jesus “will bring to light the things now hidden in darkness and will disclose the purposes of the heart. Then every man will receive his commendation from God” (1 Cor 4:5). Trump and Clinton may have to contend with super PACs and Internet trolls, but eventually all humanity will face the scrutiny of the eternal, all-knowing judge and the public revelation of all our deeds and thoughts.

Such a public revelation is a daunting prospect, let alone its eternal consequence. For those damned to hell, this public revelation will be a cause for eternal shame. They will see how they rejected God’s merciful love and chose their own destruction. But for the elect, this revelation—even of their past sins—will be an occasion to praise the mercy of God. They will sing with the saints: “Felix culpa! O happy fault that earned so great, so glorious a Redeemer!” And heaven will rejoice in the courage and penance of those who traded chains of sin for the cross of love.

In other words, before the eternal judge, all men will prove to be sinners. The difference is between the repentant and the unrepentant. The repentant man has nothing to fear on the day of judgment, for this eternal judge is also the merciful savior.

For a rich insight into this mercy, we can turn to the correspondence between St. Thérèse and a seminarian. As the saint approached her death, the seminarian wrote to her with some anxiety. He feared that once in heaven, Thérèse would know all his sins and faults. Responding with her usual candor, the saint assured the seminarian that he need not fear:

You must know me only imperfectly to fear that a detailed account of your faults may diminish the tenderness I have for your soul! Oh, Brother, believe it, I shall have no need “to place my hand on the lips of Jesus.” He has forgotten your infidelities now for a long time; only your desires for perfection are present to give joy to His Heart.

The public scrutiny of Trump and Clinton is for their demise. Opponents want to derail the other’s campaign. But this is not true of the eternal judge. Christ the King will reveal all that is hidden in order to establish true justice and to glorify his mercy. Trump and Clinton vie to secure their election to the highest office in the land, but we to secure our election to the high court in the heavens.

Let us seek God’s mercy while it is still light.

Br. Joseph Martin Hagan graduated from the University of Notre Dame in 2009. The following year, he spent trekking around Ireland, serving with N.E.T. Ministries. Then, he returned to Notre Dame’s Echo program and completed an M.A. in theology, while serving in the Diocese of Wilmington, DE. Br. Joseph entered the Order of Preachers in 2012. On DominicanFriars.org