Menu
Confraternity of the Most Holy Rosary > angels > Angels and Afterparties 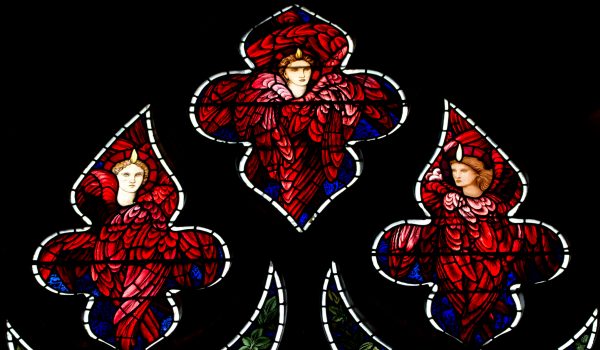 What color are an angel’s wings?

Unless they’re red, or  gold, or black, or a rainbow, or any variety of shades. It seems that Christian artists through the centuries have had imaginations much more active than ours.

Why bother to ask at all? Anyway, the question is probably misleading. I think it’s worth asking because what we imagine of angels is, in a large part, what we imagine of heaven. And that is too often washed-out, pale, white as a sheet and without the ruddy color of life.

It may be that we don’t often imagine heaven as the divine wedding banquet. Picture the images of heaven common in popular culture. It’s probably a peacefulness that is more like exhausted sleep than exciting life. It probably has pleasures that are abstract, removed from our humanity, even, in a way, inhuman. It’s probably filled with conversation that has more to do with what has passed on Earth than that which is happening in heaven.

This picture is the picture of an afterparty; a time to reflect with exhaustion upon the real event which is over and gone. It’s good, but only secondarily and derivatively. It’s unsatisfying. If we’re honest with ourselves, I think we might find that we imagine heaven as the afterparty for the party of life.

But that’s not heaven. Heaven is more real than earth—more stable, less fleeting. It is a rest in activity, not from activity. In heaven, the saints are more deeply human than they were on earth, now freed from the burden of sin that weighs man down. Heaven is not an afterparty—it’s the wedding feast which is reached only by traveling through a valley of tears. And although when the saints converse they certainly reflect on their journey, it’s not the journey that’s most important but the feast they’ve reached.

So stretch your imagination; don’t picture heaven populated by half-real, white-washed, pastel-colored angels. You might learn from the great imaginers of Christian literature and art. Although ultimately all our images fall short of the heavenly paradise where we shall see God face to face, the joy of which is inexpressible, we can catch glimpses of it dimly as in a mirror. And in that mirror I see angel wings of vivid, flashing, indescribable color.