Menu
Confraternity of the Most Holy Rosary > Uncategorized > A Papal Correction 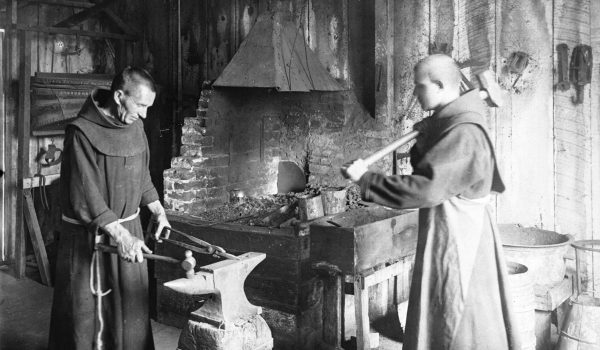 Likewise, sometimes a saint has to gird himself like a man and receive that correction. In his Letter to the Galatians, Paul narrates the scene in which he upbraids Peter. The story shows God working through the two saints, bringing about their maturation. Common men are prone to faults and failings, and overlook their own need for change. But, how is it that these Apostles, “living large,” find themselves in the crucible of fraternal correction?

The sanctity of both Peter and Paul led to an awkward moment in Antioch. Peter had received his vision from God to kill and eat various animals. His protestation to the Lord that nothing unclean had passed his lips was met with, “What God has made clean, you must not call profane” (Acts 10:15). Peter had received a revelation from God that pork is now on the menu and, more importantly, that the New Law brings justification by grace. Yet, Peter trying to be all things to all people wavers between kosher and souvlaki, Jew and Greek. His “pastoral approach” led him to part from the Word of God and to become duplicitous in action. Peter dined with the Gentiles eating as commanded by the Lord, but he hid his actions from the Jews. He was afraid of being caught red-handed…kinda.

Paul entered into Antioch taking issue with the vicar of Christ. Peter was leading the flock astray; “even Barnabas was carried away by their hypocrisy” (Gal 2:13). Even Barnabas, “the son of encouragement,” was led astray observing the juridical practice of the Old Law. St. Peter committed the venial sin of scandal, according to St. Augustine, and this was something Paul’s heart could not let stand. It was paramount that Peter lead by example, and the cost to the Church was too much if he did not. Therefore, Paul went head-to-head with the pope, in front of all, and pointed out his error. He said, “If you, though a Jew, live like a Gentile and not like a Jew, how can you compel the Gentiles to live like Jews?” (Gal 2:14)

St. Paul heeded the Gospel warning, “Be on your guard! If another disciple sins, you must rebuke the offender, and if there is repentance, you must forgive” (Lk 17:2-3).

While public denouncement tends to enrage, disrupt, and shame those involved, St. Paul executed his correction masterfully—so much so that it appears in the sacred pages of Scripture. In addition to risking public display, Paul also risked the appearance of disloyalty. St. Paul, “least of the apostles,” turns things upside down as he points out the fault of St. Peter, first of the apostles. However, his actions were not a political power grab but rather an offering of peace which is found only in the Truth. St. Paul’s words follow the higher principle of charity, which trumps etiquette. St. Augustine commands, “Show mercy not only to yourselves, but also to him who, being in the higher position among you, is therefore in greater danger.”

Those in a higher position suffer the burden of rule, and they are held accountable for their subjects. Given such weighty circumstances, a superior stands in need of prayer and mercy. Not only the mercy of forbearance, but at times the mercy of correction. St. Paul acted with the power of Christ alive within him, and St. Peter responded to the rebuke as if Christ Himself had spoken. After all, St. Paul writes, “It is no longer I who live, but Christ who lives in me” (Gal 2:20).

St. Peter’s actions at this dinner are yet another instance of his weakness. Thanks be to God that his brother and fellow apostle set him back on the “right road in line with the truth of the gospel” (Gal 2: 14). Augustine remarks, “Peter gave an example to superiors, that if at any time they should happen to stray from the straight path, they should not disdain to be reproved by their subjects.”

These two giant saints show us not only how to persevere until the end but also how to help one another along the way. They exemplify the proverb, “Iron sharpens iron, and one man sharpens another.” (Pv 27:17)  Even though St. Peter was the Supreme Pontiff, he was not above moral correction. St. Paul met St. Peter face to face.This detail may serve to remind us of another face-to-face encounter following Peter’s denial of the Lord. “The Lord turned and looked at Peter. Then Peter remembered the word of the Lord…” (Luke 22:61). This papal correction shows that all men should heed the psalmist: “If a good man strikes or reproves me it is kindness” (Ps 141:5).