Menu
Confraternity of the Most Holy Rosary > Uncategorized > A Familiar Voice 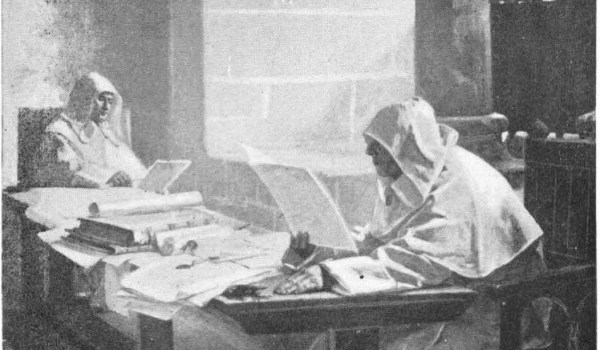 My grandfather passed away suddenly when I was only five years old. Knowing my parents, I must have seen a lot of him as an infant, but we had been living in Germany for three years when the tragic news arrived. The distance meant that he and my grandmother had only been able to visit once, although there were regular phone calls. If I try, I can remember a few things about him but what I can recall is so intertwined with pictures and family stories that I’m not sure I really have any memories of him in person.

Last year, my mother stumbled across an old family video of that last visit from my grandfather. All those family photos meant his face was familiar as I watched the recording of him wandering the country with us, but what fascinated me most were the parts where he started comparing German and American tractors. I am not, and never have been, much interested in farm equipment but, for what seemed like the first time, I heard Grandpa’s voice. As moving as that rediscovery was, what most amazed me was that I recognized it. I had lost all actual memory of his voice over the years but, in a way, I had been hearing it all along in my Uncle Dan and his son Shawn.

This sort of familial rediscovery comes to mind when I peruse the old Dominicana issues from the early twentieth century. The names of some of the authors are familiar from later works and achievements, from formal histories and informal legends of the Province, or simply from listening daily to the necrology, the record of all the friars who died on a particular date. It is a great thing to be able to appropriate this collective memory of the Province about the friars that went before us, but it is another thing altogether to hear their voices. What is most amazing though is that as much as has changed in the world in the last century, the voices are astoundingly familiar. They echo in the teaching and preaching of living friars I have known and even in the pages of the modern-day Dominicana.

Perhaps I shouldn’t be so surprised that the student brothers of the early twentieth century were interested in many of the same things as my brothers and I are today. As men being formed in a centuries-old institution there is much interest in Dominican history and saints, as well as the achievements of contemporary friars. Preparing to preach for the salvation of souls, they penned reflections on prayer, liturgy, and evangelization, as well as articles on art, literature, philosophy, and theology.

Even the pieces that focus on less perennial topics and engage the most pressing issues of their day can be surprisingly resonant with the issues of our own. For example, there is an article concerned about the influence of movies on culture and the decay in their moral quality, written several years before the first “talkies” were produced. Another seeks to articulate the proper role that college sports should play at a university, almost a decade before the first NCAA Basketball Tournament was played. The student brothers published a measured discussion of how the theory of evolution might fit with the Catholic faith, two years before the Scopes Monkey Trial, and a prophetic look in 1933 at how the time may come when the government of the United States would try to deny the Church the right “to command what is not pleasing to the State.”

The Constitutions of our Order exhort:

Let the brothers cherish the memory of those in the Family of St. Dominic who have gone before them, leaving them ‘the example of their way of life, a sharing in their communion and the help of their intercession.’ Let the brothers reflect on and make known their teaching and achievements, while not forgetting to pray for them.

In this spirit, it is a great joy to see how well those generations of student brothers lived up to the hopes and prayers expressed by the founders of Dominicana:

Recognizing the fact that journalism has become an important factor in the propagation of Christian truth, and inspired by the traditions of an Order ever zealous for the written word, whose members not infrequently immortalized their names in the pages of Catholic literature, the Novices of the Dominican House of Studies, District of Columbia, urged on by the wishes of their Reverend Superiors, in order to fit themselves for this particular and important branch of apostolic labor, have decided to issue a Quarterly Review.

In doing so, however, they are well aware how futile would be even their best efforts if not aided by the all powerful force of prayer; accordingly before attempting to lay even the foundation stones of this new enterprise, they humbly dedicate their labors to JESUS, MARY, JOSEPH and DOMINIC, beseeching at the same time the aid and protection of these heavenly patrons.

It is a privilege to be able to echo in our own voice the prayer of our older brothers in St. Dominic, and to beseech these same heavenly patrons. May Jesus, Mary, Joseph, and Dominic continue to guide our labors, and may they quickly bring all the friars who contributed to Dominicana over the years to their eternal reward.